Zodiac Secrets and the Meaning of Ophiuchus

Home/astrology/Zodiac Secrets and the Meaning of Ophiuchus

Zodiac Secrets and the Meaning of Ophiuchus 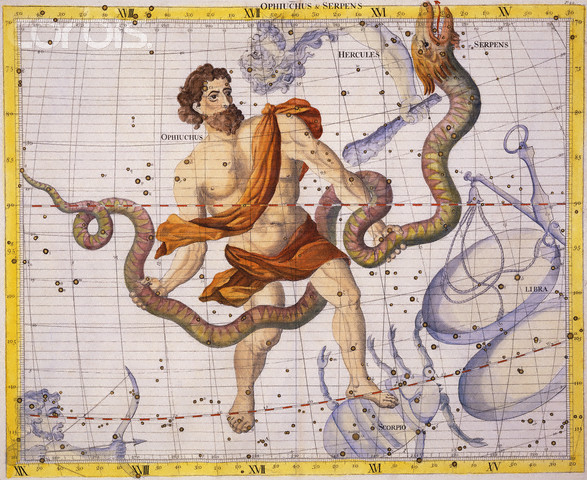 This post is designed to get at the heart of hidden astrological and hence, the astro-psychological and astro-biological effect upon we humans in light of such occult (hidden) phenomena. Ophiuchus has been taken in astrology and occult circles as being the so-called “13th sign of the zodiac,” residing in what mainstream astrology calls Sagittarius. It has been accepted as a sign indicating renewal, healing, balance, revival, and deep connection with life, sometimes being associated with Chiron the Healer, and the elements of ether and water. Specifically, its zodiac secrets have been explored and astrological definitions laid-out by the 1930 IAU constellation boundaries as being situated behind the sun from November 30 to December 18, and is known in Japan as “The Serpent Bearer,” thanks to the publication of Walter Berg’s The 13 Signs of the Zodiac (1995) in that country.

“Ophiuchus is not a sign you are born under,”explains occult astrologer Lisa Rising Berry on the subject. “Ophiuchus is an achievement, and is not just handed to someone by birth. It is connected to the 13th Gate of the Gods, our 13th Cranial Nerve, Azoth, Infinity, Daath, and Thrice Great. Ophiuchus is our future,” adds Berry, alluding to the deep need for us to come to terms with our 13th sign, which seems to be related to our galactic or higher consciousness-level aspects.

Berry has also related Ophiuchus to the merging of dual opposites in the 3D world, as well as in our own human biology and experience. She relates it to the divine merging of the sacred feminine and masculine; Christ consciousness, or the divine merging of the heart and higher mind; kundalini, as signified in the coiled snake symbology; as well as the convergence and unity of the two hemispheres of the brain. It is clear Ophiuchus is a mystical, transcendent and quantum teacher or signal for us to find our more evolved selves, and the unifying and unified aspect of those disparate parts.

Exploring The Meaning of Ophiuchus

So, many of you are still asking, “Is Ophiuchus a real zodiac sign?” “Can I get an Ophiuchus daily horoscope?” Maybe you are asking, “Is there a quintessential Ophiuchus personality?” All of these are valid questions, but there is still much mystery involving this 13th sign of the zodiac. There is some confusion over Ophiuchus traits vs Sagittarius traits, but lets attempt to clear away the confusion and get to the bottom of this cryptic sign of the zodiac.

Those of you looking deeper into the love secrets of the signs, or a more revealing horoscope reading needn’t worry yourself over the “dark secrets of zodiac signs,” as if, should your birthday lie between November 30 and December 18, that somehow you are “marked” or “born under a bad sign”. All that is superstitious nonsense, like disregarding the 13th floor of a building because you don’t like the number 13 (actually one of the most powerful and magical of all numbers).

Rather, we should regard esoteric, occult, or hidden information as a privilege and joy to be discovered! For, it’s a sign that those in power don’t want you to realize things they have integrated into their lives — i.e., symbols of human power, enlightenment, and divinity that have been conveniently hidden away from the masses so that they are unable to enjoy the fruits of divine knowledge and power. Let the Ophiuchus sign meaning, then, represent to you the power behind Christ’s own statement:”Be ye therefore wise as serpents,” perhaps one of Yeshua ben Joseph’s most misunderstood and instructive utterances.

Facts and History of Ophiuchus

Ophiuchus and some of the fixed stars in it were sometimes used by various astrologers in antiquity as extra-zodiacal indicators (i.e. astrologically significant celestial phenomena lying outside of the 12-sign zodiac proper). Ophiuchus is described in the astrological poem of Marcus Manilius: the Astronomica, which is dated to around 10 AD. The poem describes how:

“Ophiuchus, which is also known as “The Serpent-Bearer” holds apart the serpent which with its mighty spirals and twisted body encircles his own, so that he may untie its knots and back that winds in loops. But, bending its supple neck, the serpent looks back and returns: and the other’s hands slide over the loosened coils. The struggle will last forever, since they wage it on level terms with equal powers”.

In 1970, Stephen Schmidt in his Astrology 14 advocated a 14-sign zodiac, introducing Ophiuchus (December 6 to December 31) and Cetus (May 12 to June 6) as new signs. Within 20th-century sidereal astrology, the idea was taken up in Berg’s The 13 Signs of the Zodiac, which was published in Japan in 1996 and became a bestseller. Berg’s system has since been comparatively widespread in Japanese pop culture, appearing, for example, in the Final Fantasy video game series and the manga and anime series Fairy Tail.

The numerology or numerical signifier of 13th sign of the zodiac Ophiuchus is a double thirteen, or 1313, which adds up to 8. But the one-three-one-three numerological energy is powerful on its own, and one of the most salient of all zodiac secrets of our own natures. The three signifies the three levels of life: birth, life, and death, and the ones are the mid-line pillars running through us, or the ancient pillars of life and death. So, the number energy and meaning of Ophiuchus is a kind of map for how we should live and embody our highest selves, and how we must master both life and death. Let the Ophiuchus time period (Nov. 30-Dec. 18) be an opportunity, then, to embody your most fully-realized selves!